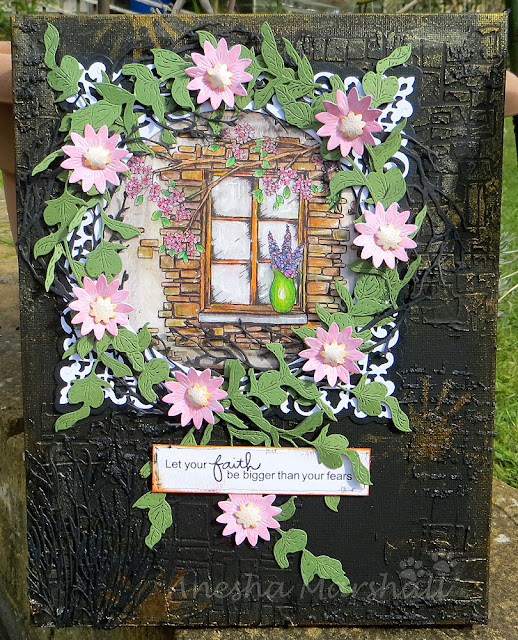 I remember when this 'Seasonal Window' digital stamp set first came out. Thankfully for all of Beccy's Place  digital stamp sets you get both the Black and White and Coloured images so I had a bit of inspiration. This time around the ideas were just endless, which shows how much growth has taken place since the first time I used these images. 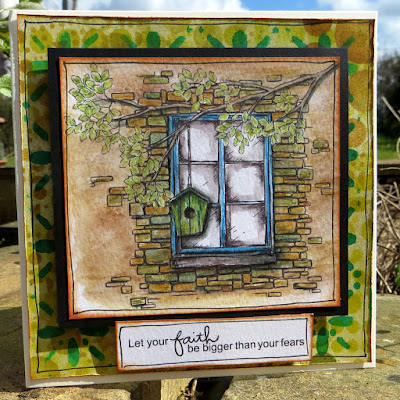 I just adore the words which comes in this 'Seasonal Window' digital set. The canvas started by printing the image and sentiment from the Seasonal Window set onto watercolour card. I used 300gsm watercolour card from The Works and it works fine for me. Both images in the card and canvas were coloured using a mixture of pan watercolour paints, Derwent Inktense pencils and white get pen.
To add texture to the canvas I used a couple of  stencils and some texture paste. Once these were dried the die cuts were then added and then the entire canvas was covered with black Gesso. Next some metallic waxes were added to the canvas and put aside. Then cut one white fancy frame and a larger black plain frame to go over the 'Seasonal Window' image. Then a layer of die cut branches in black card was added and then the dies of the flowers and leaves. This did take some time but I love the final effect.
The card was very simple once the colouring was done. The background was made using various stencils and inks to create lovely layers of interest. The colours work so well with the image from the 'Seasonal Window' set.
Hope you will be inspired to not only visit Beccy's Place Shop but to get crafting as well.
Beccy DT Stamping watercolour

Valerie-Jael said…
Fabulous window-view, and love the flowers you have added. The sentiment is wonderful! Hugs, Valerie
30 July 2021 at 08:25

carla said…
Beautiful cards, I love them both.
You did a wonderful job Anesha.

karin said…
Love your cards Anesha. So beautiful the first one with the flowers around the window.
Karin

HilaryJane said…
Both these look absolutely great, but there is something really special about the first one, I just love that background xx
30 July 2021 at 17:29

brenda said…
Reminds me of my Grans thatched cottage in Barton when I was small.

Donna Ellis said…
Wow! The look amazing! I never thought of swirling a wreath around the window. How beautiful! hugs, de
31 July 2021 at 14:42

Witchcrafted Life said…
What a peaceful, thoroughly lovely creation. I adore window scene cards as well and am always looking for fun new ways to put my window related products to use. Thank you for the bevy of inspiration that this post delivers on that front.

Wishing you a sunny, terrific last weekend of July, my friend! 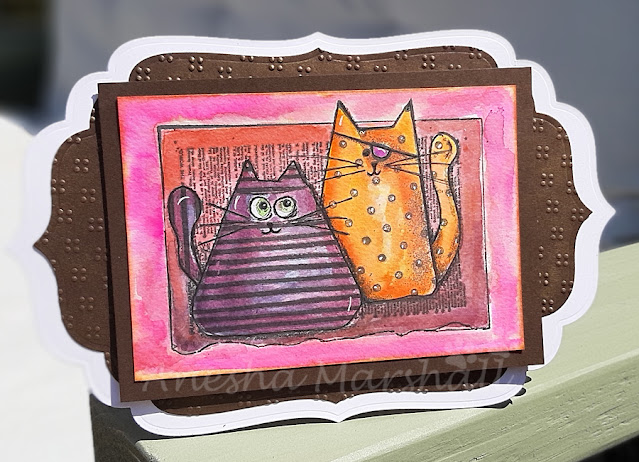 For a Lady and Great News

Sharing my creation as part of the DT for Stamping Sensations . The theme for this month at Stamping Sensations is ' For a lady.. .' .  Like to think that I am a lady (lol) and this card would suit me just fine.   Our lovely sponsor for this month is  Crafty Individuals  The winner will get a £25 voucher to use in their store.  I adore these new cats stamps from Crafty Individuals and the one used in this card is ' Burglar Cats' . The image was stamped onto watercolour card using a stamping press to get a dark impression. Then used liquid watercolours, pan watercolour paints and gel pen to paint the image. Used  some very old Spellbinders shaped dies to create the base card and the layer (which was embossing).  For the great news (for me a least) 😀 Can't tell you how honoured I am to be on this wonderful team at We Love Chocolate Baroque . Great  excuse to busy more of these lovely stamp, that's how I justify it to hubby. lol  You can see Lesley from Chocolate 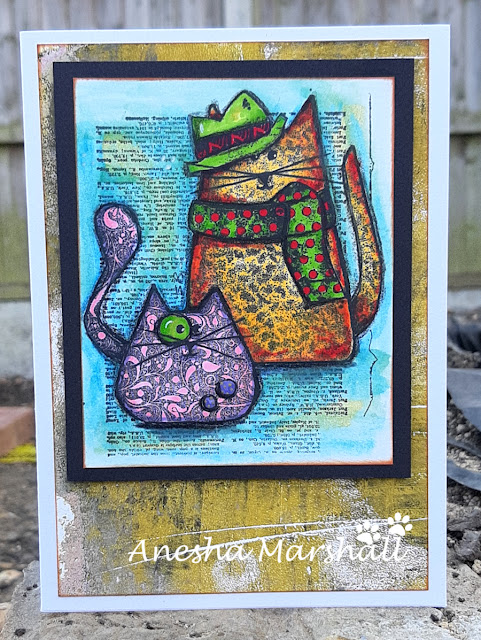 New month so it's time for a new challenge at Stamping Sensations . This month the challenge is ' I Love ...' Our lovely sponsor this month is Helping Hands Craft. As anyone who has visited my blog can guess, I love cat (dogs as well) and my gelli press. I adore making my own backgrounds and getting messy. For my card I used this adorable image from Crafty Individuals and coloured it with alcohol markers and water soluble waxes. The background was creating with acrylic paints and my gelli press Do come and join us and show your support to the wonderful Brenda and the rest of the team. God Bless. 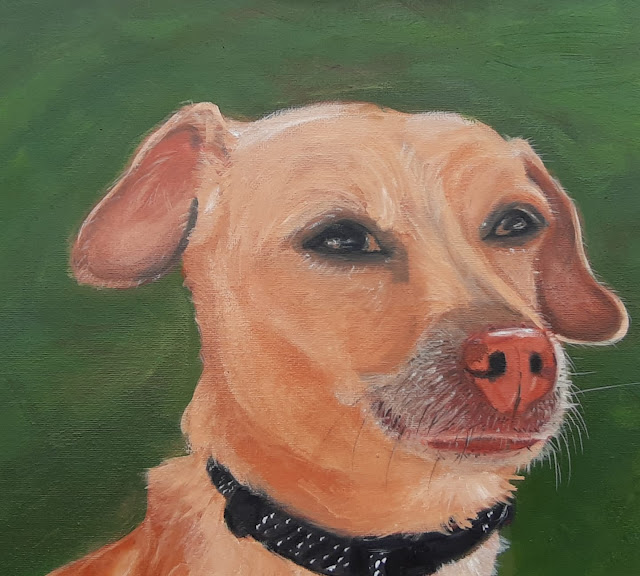 This was the first oil painting I managed to completed in just one week. Normally it takes me at least a month. This little boy is the current rescue dog of my brother in law. I know it couold be done much better but with the time I had  it's the best I could do.    Joiing Paint Party Friday .